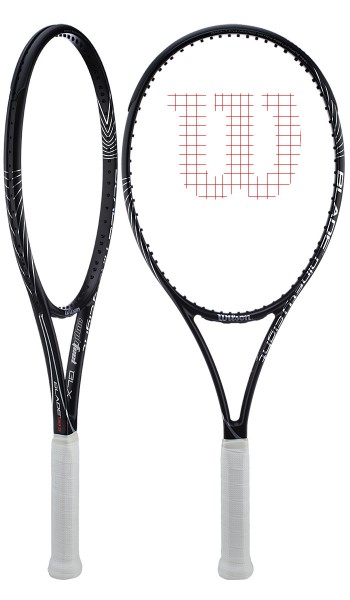 Got Spin? We do! It's called the Wilson Blade 98S India. With this racquet, Wilson turns one of the game's premier control racquets into a lightening fast spin machine. Thanks to Wilson's 18x16 Spin Effect string pattern, this racquet grips the ball tightly before snapping it out of the stringbed with impressive force and tons of spin. From the baseline our playtesters found the Wilson Blade 98S India to play lighter and faster than the standard Blade. This one explodes rapidly through the hitting zone, making it even more dangerous in the hands of an aggressive baseliner who favors heavy topspin. Thanks to the Amplifeel Technology and Basalt layup, the Wilson Blade 98S India has the same great feel of the standard version, a fact that becomes apparent on touch volleys. The speedy and spin friendly response provide easy access to power on serves along with some heavy action on slices and kickers. Finally, aggressive service returners should love how fast and easy this one moves under pressure. All in all, the Wilson Blade 98S India is sure to provide some serious spin and explosiveness to the modern player who wants a lighter, faster control racquet.