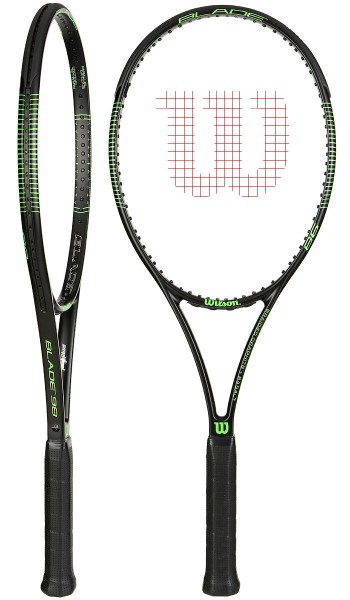 With this update to the Wilson Blade 98 (18x20) Countervail Indi, Wilson not only serves up a very familiar blend of control and feel, but they’ve also given the Blade series the same silky matte finish and minimalist elegance found in the Pro Staff line. Boasting the same target specs as its predecessor, this version of the Wilson Blade 98 (18x20) Countervail Indi is perfect for the player who wants a solid feeling racquet that delivers pinpoint control on big swings. At only 11.3 ounces strung, the Wilson Blade 98 (18x20) Countervail Indi accelerates a little easier than a traditional player’s racquet, but there’s enough mass in the head to give you a meaty swingweight (328 RDC) along with decent stability and plow-through. New to this model is Countervail, a material technology integrated into the Braided Basalt/Graphite layup to dampen impact shock. Wilson also gives this model Parallel Drilling which enables the string bed to absorb more vibration and transfer extra energy to the ball. Taken together these features create a decidedly softer and more muted feel than is found in the rising crop of stiff, modern player’s racquets. From the baseline this racquet’s dense 18x20 string pattern and relatively compact 98 square head will help keep your biggest swings inside the court. As a result you'll have more confidence when going for big pace and heavy spin. There's also more than enough mass in the upper hoop to give your shots some serious sting. At net the response is solid and precise. Our playtesters were impressed with how easy it was to block the ball deep or punch the ball for a winner. The Wilson Blade 98 (18x20) Countervail Indi remains a great option for intermediate and advanced ball strikers who want an extremely solid feeling racquet with great control.

Note : This racquet comes without a cover.

Warning: fwrite() expects parameter 1 to be resource, boolean given in /apacheserver/html/itennis.in/system/library/log.php on line 14

Warning: fclose() expects parameter 1 to be resource, boolean given in /apacheserver/html/itennis.in/system/library/log.php on line 16