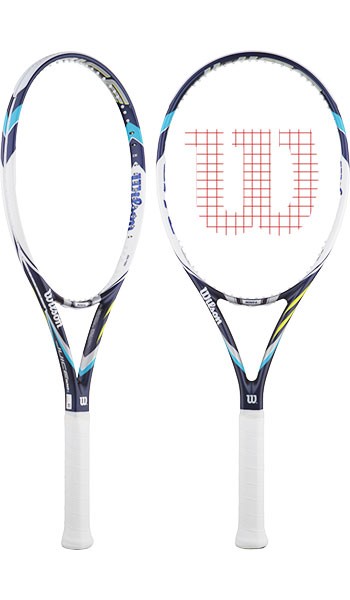 Wilson updates the Wilson BLX Juice 100L india with a slightly more forgiving response, a fact that bodes well for those who want the power of a stiffer beam minus the high impact shock. At 10.5 ounces, the Wilson BLX Juice 100L india delivers the phenomenal spin and pop of the standard Juice 100 but in a lighter package. New this version is Wilson's Parallel Drilling technology which reduces string on frame friction in key locations to enlarge the sweetspot. Thanks to the head heavy balance this one offers decent stability for a sub 11 ounce racquet. From the baseline our playtesters found medium length swings to deliver good depth, while faster strokes yielded blistering pace. As with the other sticks in the Juice line, the Wilson BLX Juice 100L india offers near effortless access to spin and allows topspin players to put a ton of pressure on their opponents. At net the head heavy balance of the Wilson BLX Juice 100L india helps steady the racquet against pace while also providing a little extra pop when punching volleys deep. Ultimately this slightly lighter member of the Juice family puts an impressive level of power and spin in the hands of 3.5+ level players.

This racquet does not come with a cover.

Warning: fwrite() expects parameter 1 to be resource, boolean given in /apacheserver/html/itennis.in/system/library/log.php on line 14

Warning: fclose() expects parameter 1 to be resource, boolean given in /apacheserver/html/itennis.in/system/library/log.php on line 16