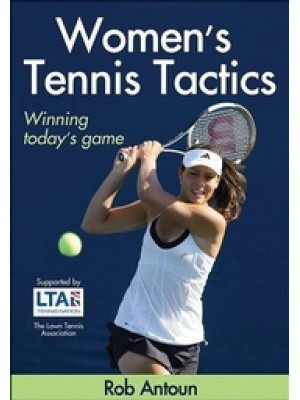 Google Preview of Book
Women’s tennis has come of age. Players today are taller, stronger, and faster than ever before. The distinction between traditional baseline, all-court, and serve-and-volley games continues to diminish as players learn how to dictate the point at the earliest opportunity.
The top players know how to play to their strengths and their opponents’ weaknesses, andWomen’s Tennis Tactics shows you how to do the same:


Whether serving, returning, playing the baseline, or playing the net, Women’s Tennis Tacticsprovides you with the strategic arsenal to elevate your game and enjoy greater success on the court.

Rob Antoun is manager of the women's National Performance Squad and Junior Academy at Sutton Tennis Academy, an international training center located in London. In this role, he works with both players and their coaches on tennis tactics, technique, physical conditioning, mental skills, and tournament programming.
A former ATP world-ranked tennis player, Antoun has coached 45 international senior and junior tennis players over a 16-year period, including two top-ranked senior British players, Lucy Ahl (2001) and Lizzie Jelfs (1996). From 1996 to 2001, he coached Hannah Collin, a British junior who reached a top 15 junior world ranking and played Federation Cup for Britain. Antoun also served as a national coach for the British Lawn Tennis Association (LTA) from 1994 to 2002, coaching five Federation Cup players and numerous British senior and junior national champions.
Antoun is a PCA-qualified coach and is one of a select group of LTA-endorsed coach education tutors. He also holds a degree in psychology. Antoun resides in Kent, England, with his wife, Catherine, and son, Jake.
"This is one of the best tennis books I have read. Tour-level expertise is clearly explained and logically presented. This book, with its on-court drills, is an asset to professional and club players alike."
Alistair Higham
LTA Coach Education Manager
"In Women's Tennis Tactics, Rob Antoun has applied his expertise of coaching and the women's game to create a practical on-court approach ideal for developing today's players. It's an outstanding publication."
Craig A. Morris
Education and Well-Being Manager for Tennis Australia
Contents
Chapter 1. Tactical Serving
Chapter 2. Tactical Returning
Chapter 3. Playing From the Baseline
Chapter 4. Approaching and Playing at the Net
Chapter 5. Opposing the Net Player
Chapter 6. Developing a Game Style